Hi everyone. Sorry I am a bit behind in the posting -- I'll try to catch up now.

Right now it is Tuesday afternoon (early Tuesday morning back home). I teach tonight at 7:0pm, so I've got some time before I need to go over my notes one last time before class.

This morning I went to the Suho Paper Museum. It is a small museum about traditional means of making paper, and you get to make a sheet of paper while you are there. Not surprisingly, this is a popular spot for the kindergarten/1st grade age range for a field trip -- they get to learn a little history, and get to make something to take home. I was interested in going there in hopes of finding something that Heather would be able to use for her scrapbooking work -- I had 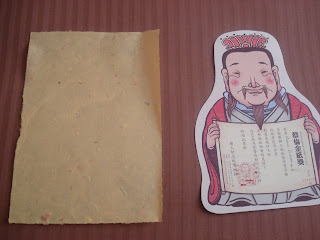 actually planned to just go to the attached shop, but the museum looked pretty interesting, so I did it, as well (and made a piece of paper to take home, too! There it is, along with my certificate as a papermaker). One of my students had made some inquiries for me to find out whether it was possible to get acid-free papers there, and had given me a contact name. So I met with the person (whose English name is Marcus), and he gave me some sample sheets of acid free paper (maybe 18" by 18"). Unfortunately, they don't really sell it in batches of less than 500 sheets, and it wasn't really quite what I was after. I did get some smaller sheets of (non-acid-free) paper that Heather might be able to use in some way, and after she sees photos of them, I'll see if I need to go back and get more. I also bought two larger sheets of hand-made paper that would look great just hung on a wall as is. I learned a bit about traditional Taiwanese paper making (which uses different trees than is typical elsewhere), and about a process where they used to "shave" the pith of a tree to get strips of paper, though those trees are almost unknown today, due to over cutting.

For lunch, I was invited to join the two people who run the local company that coordinates classes here for Baruch. Robert and Jenny Torng run LeadChief, and they have been so kind and thoughtful to me in the several times I have been here. We were joined by a finance professor and a marketing professor, both of whom are teaching courses at the same time as my class is going on. The finance professor is I believe Israeli, currently living in Winnipeg, moving to New York, and the marketing professor is Korean-American. It was interesting discussing the English-language requirements for the Baruch programs in Taipei in a car full of folks of which I was the only native English speaker, with everyone else being quite multi-lingual.

Yesterday was a really excellent, but very tiring day. I had my cooking class in the morning, and it turned out to be great. Jodie, who runs the class, used to do cook at a local restaurant and made her own sauces and such that she sold, but she decided that she prefers to do small cooking classes, where she can introduce people to Chinese culture through food. Here's the link: http://kitchen.j321.com/. 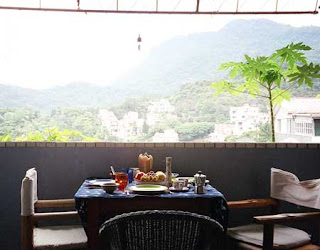 It was really fun, because I was the only student (or as Jodie says, "guest") for the day, which is actually the way she prefers to do classes. We started off talking a little bit, letting her get a sense for how much I knew about cooking or about Chinese food in general, and what sorts of things I was interested in. I had previously emailed (when confirming my class) that I was especially interested in foods that didn't require wheat flour, and everything we did was designed for rice flour, which will be great. Our first thing was simply to make soy bean milk, and typical hot beverage to start the day in Asia (moreso than cofee for many Asian folks). We then just spent time going through different ingredients, smelling and tasting the ingredients one by one, and then seeing how they tasted when mixed together, and learning which ones were more local Taiwanese, which were Szechuan, which were Shanghainese, and so on. Things like different vinegars, different oils, different peppers, different qualities of soy sauces -- she was already very good at pointing out when you can use basic (i.e., cheaper) ingredients, and when you really needed to invest in the good stuff.

We then moved on to bigger things -- a very simple but extremely good sour and spicy soup (which becomes Szechuan hot and sour soup with just a couple of ingredient additions). As with everything to come, Jodie talked about how flexible this dish was -- add in this, or that, serve it this way or that way, and so on. That was a key point in the class -- almost everything was such that it could be made in a variety of ways, and used on or with a variety of ingredients. It wasn't really a class to learn recipes, so much as a class to learn flavors and how they mix, and how they could be used in different ways.

We then made different types of sesame pastes (again, to be used on a ton of things -- fruit, meat, fish), and had a spicy Szechuan sunflower-pepper oil spicy pineapple dish -- just a spiced and herbed oil on pineapple, that was so simple, so good, and filled with all the flavors you would think of Asian cooking. We also made a sweet and sour dressing on spicy pickled cucumber, and about five other sauces. We finished up with a simple fried rice, and with conversation about why my fried rice (and stir fry) doesn't usually work out quite right. I really learned a lot, and enjoyed getting to know Jodie.

As you can see from the photo above, Jodie's Kitchen looks out over a beautfiul view. That's Elephant Mountain, and Taipei 101 is in the distance to the left. You are really close to the city, but in a gorgeous green mountain jungle area. When it was time to leave, Jodie and her boyfriend suggested that I take the foot path -- the day was beautiful and cool, and I had no obligations that afternoon. The foot path turns out to be UP Elephant Mountain to the very top, and then across, and then down. It was an amazing walk, through simply stunning terrain. The path was often very narrow, with no barrier between path and side of mountain. Along the way, tucked in to the trees and nooks on the mountain, were several shrines, mostly Buddhist, some Hindu, and one Christian that I saw (John, Jodie's Kitchen is just a little ways past the Taiwan Baptist Theological Seminary!). The whole time, you could always see Taipei 101 to the left, so you were never going to get totally lost. I was unhappy to have again forgotten my own advice to bring my camera, but I had not planned to be heading through the jungle that afternoon! By the time I reached the top of the mountain, I was pretty sure that my legs would cease to function at any moment. (You can pretty much see the area I walked in the photo.) At the very top was a small flag pole, with a couple of small Taiwanese flags flying, almost defiantly. Butterflies of types I had never seen before chased each other, and there was a small shrine there, as well. It was really stunningly beautiful. The cloud cover was low, so on the one hand you felt so high up on the mountain, but on the other hand, you could see 101 seeming to go up forever, because the clouds obscured the upper floors. I walked on down the mountain, and past a large, rustic Buddhist temple. Not a very fancy or old one, but one that seemed to be well-used. Eventually I came to a residential area, and soon enough, a taxi! It had only turned out to be about a two and half hour venture, but it was well worth it. No photos, but excellent memories.

So now I am in my room, with Sumo wrestling on tv. For some reason, I always enjoy watching the sumo when I am here. I don't understand a word anyone is saying, but the combination of ancient ritual and the sudden burst of action is really interesting. I'm going to turn it off, though, and finish up for tonight's class. I also have to finish my presentation to the American Chamber of Commerce for Thursday morning, and have several other work things to do, so I think I won't be lacking for tasks. But it was definitely worth taking the time for the one-on-one cooking class, and the walk through the mountain jungle.
Posted by Marcus W. Dickson at 2:55 AM